When one has to select one room within the house where one has to put all the soul and heart in its designing, living room will surely be the candidate. It is considered that precious space which sets tone for the entire style of decoration for the whole house. There are tons of ideas from which to choose and most of the people end up feeling hopeless with an amalgamation of ideas running through their minds. So the key is to stay specific to what one would really like to see in their small living rooms. Here are some ideas which would be handy and will avoid most of the confusion. 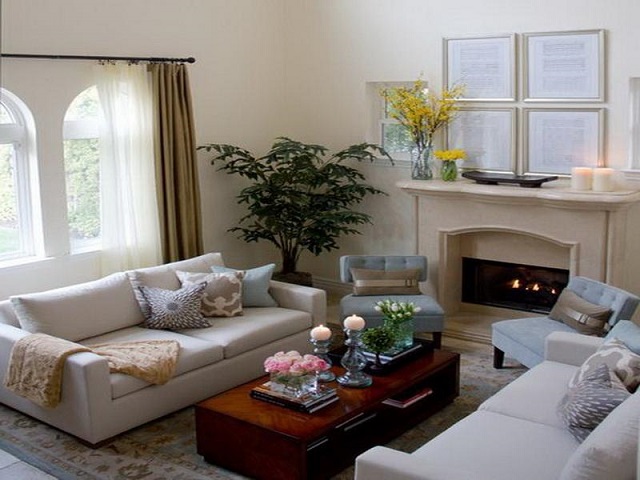 Floral, trellis or ikat? — What to select? Trick is to mix the patterns by picking one theme of color—it could be reds, blues and browns. Then use huge swaths of the solid color i.e. brown sofa, green ottoman and red chairs in order to have the space anchored.

Keeping it Airy and Light

One could pack loads into the living room—as much as a small dining set. Lucite chairs for dining, coffee table that is open-weave, as well as one unobstructed windows wall that keeps the room from appearing very cramped due to its smallness.

One could never go wrong where there is space that’s all-white. In order to keep it from appearing as hospital room, one could introduce various different textures. One crocheted throw, one linen rough-hewn sofa, as well as one nubby rug each one of them adds depth to the monochromatic look.

The tradition could be given twist and the living room could be filled with some standby silhouettes—one Chesterfield sofa, chairs with bamboo side—all in colors that are super-saturated like lime green and ocean blue.